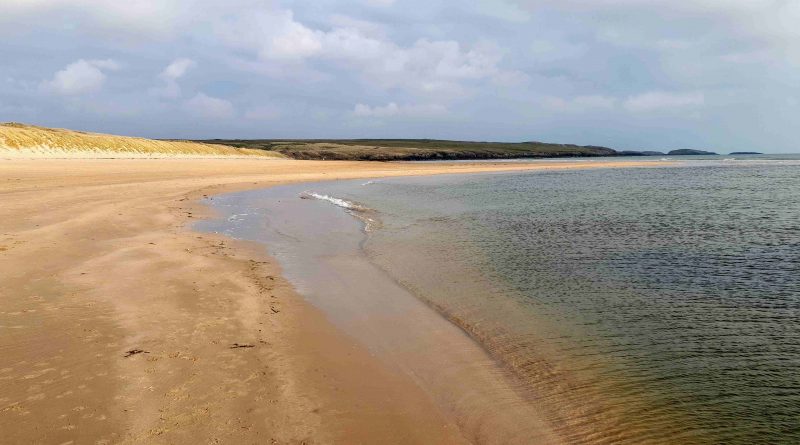 Aberffraw beach is a south facing storm beach, backed by dunes and maram grass. If fished in the right conditions it can throw up anything on its day.

It is literally just further west than Newborough beach which is well known for its Bass. Also it is just east of Ty Croes which is a popular Huss and Ray mark. Aberffraw also has an estuary flowing into the sea, the size of which obviously depends on the state of the tide.

The start of the estuary can fish well for bass and flatties, the rest of the beach fishes similar to Newborough but throws up the odd suprise ie Rays. It is quite a shallow beach fishing onto a sandy bottom. To the right/west there are some rocks you can fish from with rocks and kelp close in, ideal for Wrasse etc. This section of rock marks (West of the Estuary) can also throw up a few decent fish. You would need to walk down the opposite (town) side of the estuary to fish here.

Boats do well catching rays about 2-300 yards out with Turbot also about, these can also be caught from the beach. There are also reports of smoothhounds coming from the rocks in summer too, as well as the odd small tope.

Aberffraw is not a particularly popular spot to fish as it can be very hit and miss. That said if you are after Bass and Flatties its worth a shot. There are other marks close by if you struggle to catch. It may just be down the the venue lack of use hence the minimal reports available. The walk alone with all your gear does put anglers off at times.

There is plenty of free parking at Aberffraw, just follow the estuary down to the beach. Remain on the town side to fish the rocks but its a bit of a trek with heavy tackle.

Parking is plentiful and free at LL63 5LJ